Hockey season is a popular time of year for fans across the globe. Not only does it excite Americans, but people halfway across the world! With the 2019-2020 season underway, many teams have made their mark in the league. However, some teams have fallen short of their expectations. With just two weeks of play, the Edmonton Oilers defy the odds and become the only undefeated team to play a full five games as of October 13. On the other hand, many teams such as the Dallas Stars, New Jersey Devils, and the San Jose Sharks struggle in the first few games.

Although only five games have been played, there are already some standout teams. In addition to Edmonton, the Carolina Hurricanes, Buffalo Sabres, and Colorado Avalanche are at the top of their divisions. Carolina is 5-1, Buffalo is 4-0-1, and Colorado is 4-0. Other commendable teams this season include the Boston Bruins, Winnipeg Jets, and Anaheim Ducks. 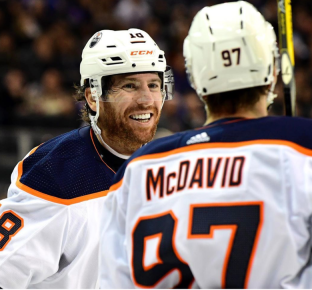 James Neal smiling after scoring 4 of the 5 goals against the New York Islanders.
Image credits: @Edmontonoilers on Instagram.com.

Conor McDavid of the Edmonton Oilers currently leads the league in points, and his teammate James Neal leads the league in goals scored. McDavid has 12 points in five games, and Neal has 7 goals in five games. In addition, Dougie Hamilton of the Carolina Hurricanes has the highest rated +/- in the league. Every time a player is on the ice when a goal for their team is scored they receive a +1. On the flip side, whenever they are on the ice when their opponent scores, that is a -1. Hamilton currently stands at a +7. In addition to skaters on the ice, many goalies have made an immediate impact. Frederik Anderson of the Toronto Maple Leafs leads the pack with the most amount of wins (so far) by a goalie. While Anderson was in net, the Maple Leafs secured 3 wins.

The rookies of the league have also come to play. Victor Olofsson of the Sabres ranks #1 of the rookies when it comes to points and goals scored. Cale Makar, a defenseman of the Avalanche, ranks the highest in assists. Kaapo Kakko, the second selection of the 2019 draft class, scored his first goal on October 12th. Unfortunately, this goal was the only one netted for the Rangers during their 4-1 loss to the Oilers. Jack Hughes has not yet gotten on the statistics sheet but has definitely proven himself to be an extremely tough competitor.

The 2019-2020 season is off to a great start. There is still a whole 70+ games for each team to play, which means there is plenty of time for bottom-ranked teams to rise to the top. Who do you think is going to be raising the coveted Stanley Cup this season?