The devastating series of coordinated attacks in Sri Lanka on Easter Sunday have reached a death toll of 321. The bombings were carried out by seven suicide bombers in three different areas of Sri Lanka- Colombo, Negombo, and Batticaloa. There were a total of eight attacks and one failed attempt, most occurring in Colombo, but with the most catastrophic in Negombo.

There were six Colombo attacks, currently amassing 82 deaths, targeting a Roman Catholic Church (St. Anthony’s Shrine), four hotels, and a housing complex. The Negombo bombing at St. Sebastian’s Church (Roman Catholic) has killed at least 104 people. There was also an attempted bombing at the Bandaranaike International Airport in Negombo, but the 110 pounds of explosive material in a pipe bomb were discovered and diffused by the Sri Lankan Air Force. The attack in Batticaloa was on Zion Church and 28 people were killed. 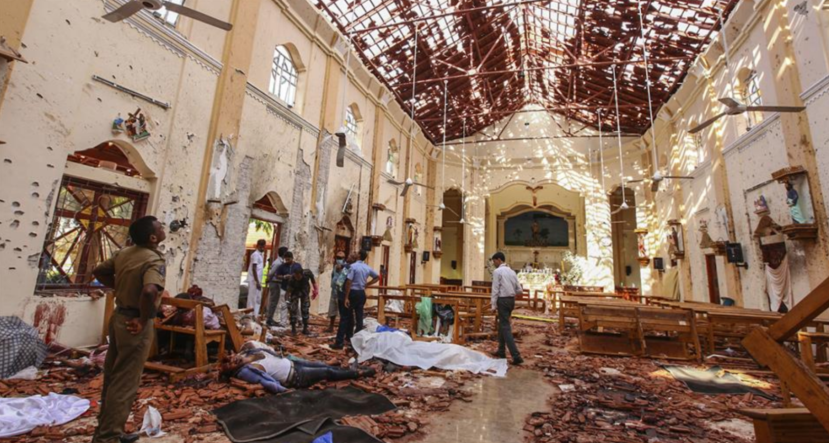 ISIS has officially taken responsibility for these horrific attacks and revealed the noms de guerre (names assumed in combat) of the seven suicide bombers. Three of these names were matched to an Islamic State chat room called “Greenb1rds” on which three photos were posted of the asserted “commandos” of the bombings wearing masks and standing in front of the Islamic State Flag. Based on the chat room conversations, the targets for these attacks were Christians and countries who are apart of the coalition against ISIS.

There have been many questions arising about the Sri Lankan government’s knowledge of the threat and failure to act on it. Sri Lanka has been closely monitoring a small, not well-known Islamic radical group called the National Thowheeth Jama’ath and had been warned, supposedly by foreign agencies, that they were planning church attacks. Furthermore, security services arrested 24 suspects within hours of the attacks, implying that they already knew the locations of the group’s headquarters. Making things more complicated is that the president and the prime minister were in a disagreement, causing Ranil Wickremesinghe (prime minister) to be unaware of the information the security services had.

Ranil Wickremesinghe stated that there are “still people on the run with explosives” and therefore the danger hasn’t passed yet. Although, the Sri Lankan government is working with foreign agencies such as Interpol and the FBI to find and eliminate the threat. The people of Sri Lanka, as well as those affected from around the world, are facing immense devastation at the hands of terrorist groups. Negombo has been turned into a mass funeral and gravesite where the families of the victims can mourn their losses. With 321 dead (and rising) and over 500 injured, Sri Lanka will continue to feel this attack for a long while, but with efforts to find those behind it and more information streaming in every hour, hopefully, it won’t happen again.