November 11, 2018, marked the 100 year anniversary of Armistice Day. Armistice Day symbolized the end of World War I, and nations around the globe held ceremonies to commemorate this important event. Some countries with globally-recognized ceremonies included the United Kingdom, Belgium, and France. In London, 10,000 people participated in the People’s Procession, a march past the Cenotaph to mark the Centenary. Descendants and family members of soldiers were especially encouraged to attend. People were also invited to ring bells across the country, in an attempt to replicate the celebration that took place once the war came to a close. In Belgium, thousands gathered at Menin Gate in Ypres, and a minute’s silence was held “at the 11th hour of the 11th day of the 11th month.” After the silence, poppies were cast down from the gate’s arch and floated to the crowd below. In France, 70 world leaders, including President Donald Trump, Chancellor Angela Merkel, and Prime Minister Vladimir Putin. These important figures gathered that weekend at the Tomb of the Unknown Soldier at eleven o’clock. Like most countries in Europe, they also held a minute of silence at that time. Emmanuel Macron, France’s president, then delivered a speech warning leaders of the dangers of nationalism, calling it a “betrayal of patriotism.” That weekend, some also took part in the many other ceremonies that happened across the country. This Armistice Day was a solemn reminder of the horrors of war and was felt across the world. 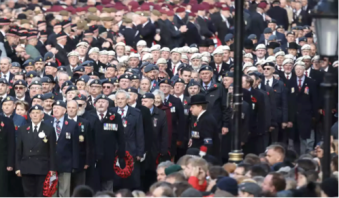 2018 Armistice ceremony in Paris, France. Photo courtesy of The Guardian.