Player of the Week: Sydney Taylor

The Accents Player of the Week selection is someone who demonstrates tremendous athletic achievement while being a team player. The first Player of the Week Accents has chosen is Senior Volleyball player, Sydney Taylor. Volleyball is one of IHA’s top sports as they won the state Tournament of Champions in the 2017 season. In 2018, IHA is #1 in the Bergen County Tournament, which is an immense honor because the top 4 teams in NJ all reside in Bergen County. Sydney, who has made a substantial impact in the program since her freshman year, leads the highly elite team as an outside hitter. 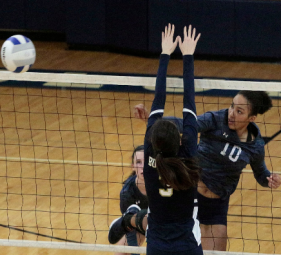 Sydney Taylor making her mark on the court! Photo courtesy of NJ.com.

Sydney started playing volleyball when she was only six years old. Sydney’s mother familiarized her with the sport, and she has fell in love with the game ever since. She always went to parks to practice her skills and strived to enhance her game. Sydney’s incessant dedication to the sport led her to be on the varsity team all four years of her IHA career. Sydney dominates every statistic category with 27 Service Aces, 100 Service Points, 155 Kills, 1 Assist, 8 Blocks, and 155 Digs. She is having a superb season, which will be important down the stretch with the looming county and state tournaments.

Not only do sports advance your athletic abilities, but they allow you to create special memories. Sydney was asked to recall one memory that she holds near and dear to her heart. “My favorite memory would be winning the 2017 TOC final last year. It was an amazing feeling because I was able to win it alongside such great people. The entire team worked super hard, and I achieved one of my biggest volleyball goals.”

The 2017 Tournament of Champions win meant IHA finished the #1 team in the entire state of New Jersey. This is something that Sydney truly values and something that any athlete dreams about. “Being on the number one team in the state definitely has its ups and downs. Sometimes it can be stressful because IHA Volleyball has been number one in the state for the last two years, and has made three appearances in the TOC final the last three years. But those experiences have allowed me to grow as a person and as a volleyball player. I have been able to play in high-pressure situations when the entire gym is rooting against my teammates and me. Being on a leading team has been an amazing opportunity for me, and I can definitely attribute my own growth to the IHA Volleyball program.”

Sydney has been an exemplary player on the IHA Volleyball team. Her presence has made such a strong impact on the success of the program and the future for IHA Volleyball. Sydney will be furthering her academic and athletic career at Providence College in Rhode Island. We wish Sydney all the luck in college and hope that she kills in on the court at Providence. Go Friars!