In her four years at IHA, Emily Koehne has found her passion: combining STEM and public speaking! As a member of the STEM program, she has supplemented her education with a variety of extracurriculars. With regard to public speaking, she is co-president of Model United Nations, a lead attorney for the Mock Trial team, Senior Editor in Chief for Accents, and founder and president of Chinese Culture Club. As for STEM, she is co-president of the Applied Engineering Club, co-president of Science National Honor Society, and regularly utilizes the school’s 3-D printers. She also volunteers at the Oasis Shelter for Women and Children in Paterson, coaching a FIRST Robotics Team and helping the children to envision their futures. 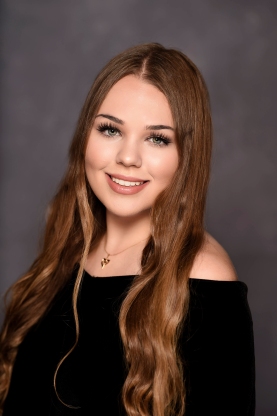 Perhaps the most impressive of her leadership positions is CEO! Emily started her own business her junior year, called

STEMilyK. It is a company that aims to change the way the world views STEM. Since starting STEMilyK, she has interviewed m

ore than 30 women in STEM and been interviewed by more than 10 press outlets. As a 17-year-old girl, she has had to overcome both ageism and sexism. It is impressive how well she handles this pressure to turn her dream business into a reality.

This May, Emily spoke at The Toy Association’s PlayCon in San Francisco, alongside executives from companies such as Facebook, Google, Disney, and Nickelodeon. She hopes to turn STEMilyK into an international STEM entertainment company and is currently working to trademark and patent her ideas. Emily envisions having STEMily as a character on Disney Jr. or Nick Jr. as a subject of a children’s show that promotes STEM.

Emily came from a grammar school with minimal funding and she credits IHA with helping her discover her passion for STEM. IHA provided her exposure to STEM and its applications in the real world. While at IHA, her favorite teacher has been Mr. Millard. The open environment he creates in the classroom makes her excited to go to AP Calculus BC class, as well as unafraid to ask questions. Emily says that his passion for teaching is obvious and his love for math is contagious. Mr. Millard remarked on Emily’s attitude as a student saying, “Emily is a pleasure to have in class. She always comes in with a positive, upbeat attitude. She is a hard and conscientious worker. Emily is a wonderful role model for the girls at IHA.”

While in college, Emily plans to double major in computer science and a humanities class and expand STEMilyK.

We wish Emily the best of luck in college and with her business and thank her for the large impact she left while at IHA. Emily, remember that IHA will always be your home!