The Villanova Wildcats end a flawless basketball season crowned National Champions. The Wildcats defeated the Michigan Wolverines for their second NCAA championship title in three years. The final game of the March Madness tournament took place in San Antonio, Texas on April 2nd.  To get to their position, Villanova beat six different teams by an average margin of 18 points. These teams include Radford, Alabama, West Virginia, Texas Tech, Kansas, and finally, Michigan. The score of the Championship game was 79-62. 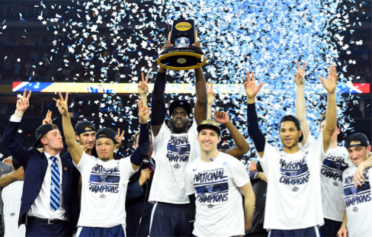 2018 is not the first time that Villanova held the title of National Champions. In 2016, No. 2 Villanova defeated the No. 1 UNC Tar Heels on a 3-point buzzer beater shot by Kris Jenkins. Jenkins has an incredible story that connects him to his National Championship opponents. He was legally adopted into UNC starting guard Nate Britt’s family in 2007. The two grew up as teammates, and this was the first time they were on opposing sides of the court. Nova Nation and the Britt Family will forever cherish this championship game.

Villanova’s rise to greatness is impressive considering the size of its student body.  Villanova only has 10,800 students between undergraduate and graduate.  Recent teams to win multiple national championships in a short period are much larger, such as North Carolina (29,000), Connecticut (26,000) and Kentucky (30,000). Villanova is the smallest school to win multiple National Championships, and the smallest school to win one since 1954 when LaSalle captured its only title in history.  However, it may not be long before a smaller team wins.  Recently, smaller schools such as Butler and Gonzaga have come close, making the title game but losing.  Also, Villanova’s student body could expand.  A recent article by US News and World Report showed that in 2016 after Villanova won its second National Championship, it saw a 22% increase in student applications.  Who knows what this championship will do? One thing is for sure – it is a good time to be a Wildcat!