Sixteen people were killed last Friday when a bus collided with a tractor trailer in the Saskatchewan province of Canada. Tragically, the bus was carrying a junior hockey team from Humboldt. Another 13 people are injured, two in critical condition. 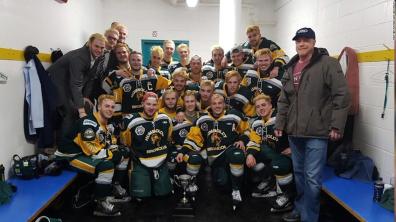 Junior hockey team, the Humboldt Broncos, lost ten players, two coaches, an athletic trainer, and three others in a collision with a tractor trailer on the way to a playoff game on Friday. Photo courtesy of CNN.

Ten of the 16 victims were players for the Humboldt Broncos and range from 16 to 21 years old. Two coaches and one trainer also passed away as a result of the accident. Trainer Dayna Brons passed away in the hospital on Wednesday, five days after the accident. Additionally, the driver of the bus and two employees of a local radio station who were covering the team were killed.

A coroner’s mistake was discovered and reported on Monday. The Saskatchewan Coroner Office initially recorded that Xavier Labelle, 18, perished in the accident. It was determined that Labelle is actually alive. Sadly, Parker Tobin, 18, who was initially believed to be alive, was killed. The Saskatchewan Coroner Office explained that identifying the victims was difficult as many looked alike and all players of the team had dyed their hair blonde for playoff season. The mistake was discovered when dental records were used to identify the victims.

According to the Royal Canadian Mounted Police, the crash occurred at 5 p.m. near Armley on the team’s way to Nipawin for a playoff game. There were 29 passengers on the bus.

Since the accident, the community has responded by starting a GoFundMe page. They have raised over $9 million by over 108,000 donations. There has also been a movement among the people of Humboldt to leave hockey sticks on their doorsteps in honor of the victims. The movement was started by Brian Munz, a local sports commentator. A vigil was held on Sunday with more than 5,000 people, including Prime Minister Trudeau, in attendance.

One of the 13 injured, Ryan Straschnitzki, 18, was paralyzed from the chest down. However, his parents, Tom and Michelle Straschnitzki, told the Calgary Herald that he is eager to get back on the ice. He is already considering sledge hockey. He also expressed that at the moment of the accident, he only wanted to help his teammates around him. His mother stated, “His main thought when he was lying on the road looking at everybody and he couldn’t move. He said he wanted to help and he couldn’t move.”