Rome’s newest subway line, which is being excavated by archaeologists, has uncovered multiple ancient remains of Roman architecture dating back to 271 AD.

Two years ago, military barracks were found during the excavation of the Amba Aradam station. Just last week, the remains of a handsomely decorated domus, or house, were found that were believed to belong to the commander of the military post.

One of the archaeologists responsible for the site, Simona Moretta, was shocked to have found such a large remain still intact and so breathtaking. The house has a courtyard and is adorned with 14 rooms, one even appearing to be heated. The house was found to be extremely well preserved. Moretta claims, “The decorations were mainly intact, both the patterned mosaic floors and the frescoed walls.” 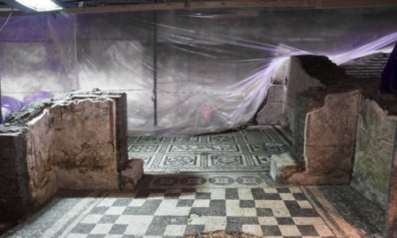 The richly decorated domus that was found underneath the Amba Aradam station in Rome. Photo Courtesy of the New York Times.

The richly decorated domus that was found underneath the Amba Aradam station in Rome. Photo Courtesy of the New York Times.The structure of the walls also tells a significant story of this time period. Because the walls had been leveled at five feet and the rooms were filled with dirt, it is believed that the home had been purposely buried in the third century before the Roman Emperor, Aurelian, began building protective walls around the city.

The foundation of another structure had also been revealed 40 feet below the surface. Although this one was less ornate than the previous, it still illustrates a tremendous history of Rome.

As of now, only 21 of 24 subway lines are open, connecting the city center to a town east of Rome. The San Giovanni station is likely to open soon and will showcase more artifacts that were hidden underground. The new artifacts and remains are being preserved and will be open to the public in 2022. Moretta says that more digging is underway, and they are hopeful in finding more artifacts.