The Greatest Showman was released on December 20, 2017, and since then it has been sparking talks of its beautiful story and music. The movie is based on the true story of P.T. Barnum, the man who introduced the circus to the world. It follows him on his journey of taking the underdogs and those frowned upon in society to the spotlight where they can be loved and appreciated. The movie shows his success, as well of his downfalls and building himself back up again. It is the story that no one ever knew existed behind the circus. 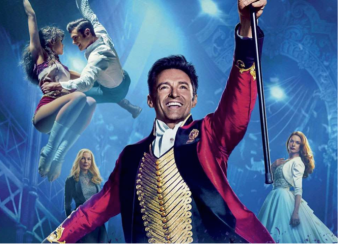 Make it your new years resolution to see the new musical movie The Greatest Showman now in theaters! Photo courtesy of Grupocine.

The entire movie is set to beautiful music that blends modern styles with Broadway to create a kind of sound everyone can enjoy. The soundtrack, composed of eleven songs, was written by Benj Pasek and Justin Paul who worked together to also write the music to the movie La La Land and the Tony Award winning musical Dear Evan Hansen. They won both an Oscar and a Tony for their work so they seemed like the natural pick to write music for a new musical movie. The title song of the film This is Me reflects what the movie is all about, that what makes every person unique is what makes them special. The song Rewrite the Stars, sung by Zac Efron and Zendaya tells of their forbidden love story. The music is only one of the amazing aspects of this movie that is helping it climb box office ratings.

The actors and story are the final parts of this movie that allow people to realize how incredible this movie truly is. Hugh Jackman plays the greatest showman himself, P.T. Barnum, Zac Efron plays his upper class apprentice Phillip Carlye, Zendaya plays Anne Wheeler, Phillip’s forbidden love interest, and Michelle Williams plays Charity Barnum, Jackman’s film wife. These actors and actresses dedicated seven years (the period of time for making this film) to telling this story of making the “oddities” of society loved and valued. People are able to realize this beautiful story where the people most would never give a second chance are so much more important and deserving of love then anyone would like to realize. This movie tells of the making of what true show business is, bringing those who are on the outside of society, into it and welcoming all people no matter who they are or what they look like.