At only the age of 11, Mary Anning began her scientific career, discovering a fossil of an Ichthyosaurus – a reptile of the late Triassic and early Jurassic period. Her brother had given her the task of recovering the bones of a crocodile in Lyme Regis, England. However, these bones were not from a crocodile, but rather an Ichthyosaurus. 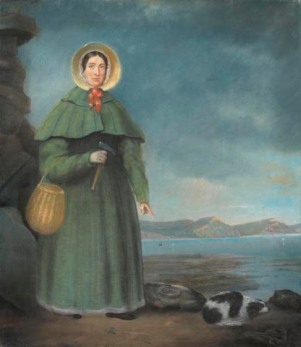 A drawing of female paleontologist of the 1800s, Mary Anning.

Anning was born on May 21, 1799 in Lyme Regis, England. Her home was very close to the ocean, and this was where she carried out much of her fossil hunting. After she found the Icthyosaurus, she regularly looked for fossils that were revealed by landslides on these cliffs near her home. Her work was also inspired by her father, who took her and her brother on trips to find fossils that they could sell to tourists. She went on to discover the first two complete skeletons of the plesiosaur, the first pterosaur skeleton not found in Germany, and fossils of other fish. Her work was later used to discover that coprolites, which were thought to be bezoar stones, were actually feces that had been fossilized. Additionally, she found that ink sacs were fossilized in belemnite fossils.

Anning’s family was poor, and she did not receive much of an education. Instead, she taught herself anatomy, geology, paleontology, and scientific illustration that allowed her to carry out her work. Her work brought her much fame among the geologists of Europe and America. Some would travel from as far as New York to meet with her. Anning was always willing to share her knowledge and discoveries with the men in the field that visited her. She soon realized, though, that they were not giving her credit for what she shared with them and was angered. She even wrote in a letter, “”The world has used me so unkindly, I fear it has made me suspicious of everyone.” As a woman, she never had any scientific writings published and could not join the Geological Society of London.

Anning passed away in 1847 of breast cancer. Since then, her life and her work have been studied very much. She has received the credit she deserved during her lifetime. The Royal Society even listed her as one of ten influential female scientists in British history.

Anning has certainly made her mark on the fields of paleontology and archaeology and deserves recognition as an outstanding woman in science!