Former USA Gymnastics doctor, Larry Nassar, has been accused of sexual assault by over 130 women, including team gymnasts. On Wednesday, November 22, Nassar pleaded guilty to seven assaults—landing himself a spot in prison for 25 years. Nassar is a 54-year- old father of three that had been considered one of the most elite physicians on the USA Gymnastics Teams. It has been reported that he was not performing appropriate medical care, as he touched his victims, most often without gloves. 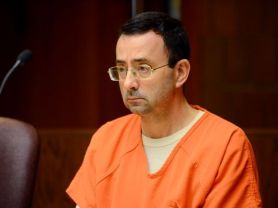 Nassar’s hearing was in Lansing, Michigan, not far from the clinic in which he used to practice, Michigan State. Nassar’s statement at the hearing reads, “For all those involved, I’m so horribly sorry that this was like a match that turned into a forest fire out of control.” Some of the many famous gymnasts have recently come forward about the assaults, including McKayla Maroney, Aly Raisman, and Gabby Douglas.

Although, Nassar is not the only one would who could be getting in trouble. In March, USA Gymnastics chief executive, Steve Penny, resigned. He faced criticism for waiting five weeks to report a complaint about Nassar to law enforcement and not informing officials at Michigan State, where the physician was still treating patients.

This case has persuaded Congress to take stricter measures in abuse prevention throughout Olympic sports organizations.

It seems that Nassar has come to terms with his sentence and takes full
responsibility for his actions. He says, “I pray the rosary every day for forgiveness. I want them to heal. I want the community to heal.” However, some gymnasts are not buying his act of absolution. Lindsey Lemke, a gymnast at Michigan State, believes that it is absurd
that Nassar could just ask for forgiveness when he does not understand how many people are truly hurting.

Nassar was fired from the USA Gymnastics Team in 2015 and reported to the FBI. The U.S. Olympic Committee is absolutely disgusted by the acts that occurred, and everyone on the committee is praying for the victims and their families.