It has officially been announced by the British Royal Family that Catherine the Duchess of Cambridge is expecting her and Prince William’s third child. The announcement made earlier this September made social media and news stations alike become invested in the new royal baby as the world has been two times before. The announcement was made only when Catherine was about three months pregnant which is abnormally early even for normal mothers-to-be. 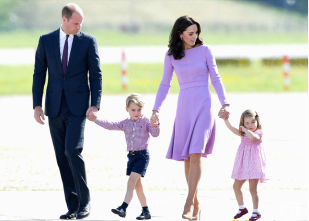 William and Catherine with their two children, George and Charlotte, awaiting the new Cambridge baby! Photo courtesy of People

Her Royal Highness was too ill to attend her originally planned engagement, so the palace decided it was time to tell the world of the new royal baby. William and Catherine already have two lovely children, Prince George who is four, and Princesses Charlotte who is two. Throughout both previous pregnancies, the Duchess suffered from hyperemesis gravidarum and the third time around is no different.

Hyperemesis Gravidarum, in basic terms, is severe morning sickness. It is constant vomiting that does not stop after the first trimester, and there is an ever-present threat of dehydration. Catherine has gone through this before but it does seem as though this time may be worst then the last. She is being cared for at her home in Kensington Palace and hopefully will not need to make any visits to a hospital. She will not be able to attend any previously scheduled engagements and will be taking some downtime to ensure her own health as well as the baby’s. The Duchess was not even able to attend her son’s first day of school because she was so sick.

However, morning sickness aside, the couple and members of both families seem to be very excited about the news and only want what will be best for Catherine and the new baby to come. Prince Harry is very excited for the news, even though new Cambridge baby number three bumps him to number six inline for the throne. The Duke and Duchess have made it clear, without even having to say anything, that they are very invested parents who are hands on and love the family time they get to have with their children. Prince George and Princess Charlotte grow up as far away from the spotlight as they can get and know that they are ordinary children in extraordinary circumstances.

This new baby will be born into a loving family with as normal of a life as they can possible get. Good luck and congratulations to the couple! The world cannot wait to meet your new little one!