Dancing, singing, laughing, and fundraising….all on a school night! IHA held its annual Senior Talent Show on April 5th to fundraise for senior prom. As always, it is a chance for students to share their talents and support their friends.

Walking into the Performing Arts Center that night, one immediately saw a swarm of red. Seniors, adorned in their red shirts and senior sweats, packed into the front center of the auditorium. Underclassmen, family, and friends filled the rest of the seats. Waiting for the show to begin, seniors chanted and even took a group selfie.

Natalie Deutsch’17 and Maggie Mahoney’17 started the show, acting as Mistresses of Ceremony. They introduced each performer, cracked jokes, and led their own skits. They did an excellent job of relating to the student body.

The show was planned and run by Mrs. Kearns, the senior class moderator. She expressed the hard work all put in to make the night a success, saying, “Senior officers, the tech crew and myself work diligently on producing the best show possible. The night before the show is always long and filled with worry, will we pull this off? But as the night goes on, it is obvious we are going to have another successful show. So heartwarming is the way our seniors sit up front encouraging and cheering on each performer. This is when I realize the talent show is worth every bit of the effort.” 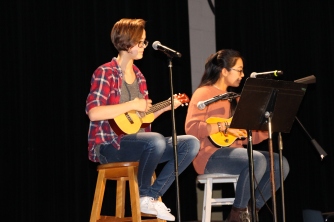 The show was split into two acts, with each act holding a large variety of talents. From dancers to poets, virtually every talent was represented in the show. Of course, the show also planned for humorous skits led by the senior class and faculty of IHA.

One of the many incredible acts was performed by a pair of IHA sisters. Christine Jacob’17 and Angeline Jacob’20 performed an Indian dance to a remix of famous Bollywood songs. The pair had previously performed for the prime minister of India at Madison Square Garden, and their performance wowed the audience. In their performance, they balanced pottery on their heads and even utilized glow sticks to create a fascinating light show. The audience erupted in cheers and applause as the Jacobs threw their glow sticks into the crowd. Jacob’17 has performed in the talent show all of her four years at IHA and remarked, “The talent show has always been so much fun for me, and I love seeing everyone come out to support the senior class! I seriously can’t believe that it’s been four years and that this was my last year performing! I’m going to miss it so much!”

Another fan favorite was a slam poetry piece performed by Gabriella DePinho’17 and Reagan Stroka’17. Their poem spoke about the power of women and the confidence that IHA fosters in its students. The powerful and unapologetic performance again caused the audience to erupt into cheers of agreement and empowerment.

Of course, the Senior Talent Show would not be complete without its humor. This included Deutsch’s rendition of “I Dreamed a Dream,” in which she recounted all the moments that made her feel she lived the IHA dream. Another was the faculty skit, in which teachers dressed and acted as seniors, singing their own version of “Closer,” by the Chainsmokers. As he does every year, Mr. Hotz sang and played the piano, this year to his lyrics set  to the tune of Frozen’s “Let It Go”, in which he narrated late students walking into IHA. During their senior presentation, seniors played IHA versions of Jimmy Kimmel’s Lie Witness News, Teacher Carpool Karaoke, and IHA Girls on The Street.

Finally, the show closed with the traditional Senior Skit that depicted each year of Class of 2017’s experience at IHA.  In between years, Deutsch entertained the crowd with different performances. What would an IHA event be without a group sing-a-long to “Sound of the Saints” by Audio Adrenaline? After the humorous senior skit, Deutsch’17 and Stroka’17 sang Vitamin C’s  graduation song “Friends Forever” with the entire senior class behind them on stage. It was a touching end to a night of talent, humor, and unity for the graduating class of 2017.