Two Brains are Better Than One: The Enteric Nervous System

The brain in your head is one of the most distinguishable organs in the body. It is known as your personal command center, receiving signals from your sensory organs and sending messages to your muscles. Comprised of about 100 billion neurons, the brain makes up around 2 to 3% of your body mass, yet uses roughly 25% of the body’s energy. However, there is new research suggesting that a “second brain,” besides the one in your head, has the ability to influence how you think and what you feel.

The brain is connected to other organs and parts of the body, such as the vocal chords, heart, lungs, and stomach via the vagus nerve. You’ve experienced the vagus nerve at work when, under stress, you’ve exhibited “fight or flight” symptoms such as a cracking voice, racing heart, shortness of breath, and a knot in your stomach. More importantly, the vagus nerve directly connects the brain in your head to your “second brain,” the brain in your gut that is formally known as the Enteric Nervous System (ENS). 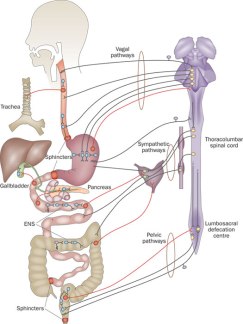 Discovered in the mid-19th century, the ENS is the network of neurons responsible for the function of the entire gastrointestinal (GI), or digestive, tract, from the esophagus to the end of the rectum. It is quite similar to the brain, since it receives messages from and sends messages to the body, is made up of different kinds of neurons, has barriers to maintain a stable environment, and is able to produce a variety of hormones and neurotransmitters that can also be found in the brain. The ENS is part of the autonomic nervous system, a system of nerves that controls visceral functions, and is essentially autonomous. Due to its complex system of neurons, the ENS is capable of overseeing its own functions and reflexes without the brain. If the vagus nerve is severed, the ENS is still able to perform its digestive functions.

As described by food researcher Heribert Watzke, “We have a layered control system.” Our lower “second brain”, the brain in our gut, works to digest food. The higher brain in our head integrates signals coming from the lower brain to generate behaviors. On an empty stomach, the hormone ghrelin is produced, stimulating hunger and boosting the appeal of food. As a result, a signal is sent to the brain saying “Go eat.” When we’ve eaten enough food, a stop signal will be sent to the brain as well.

The primary function of the ENS is digestion. The ENS moves the food through the body’s GI system and digests and transforms it into energy that can be used by the body. Additionally, the ENS protects the gut’s biochemical environment, maintaining the proper pH and chemical composition necessary for digestive enzymes to function properly. It also protects us from dangerous bacteria and viruses that can make us sick. When a harmful pathogen is detected in the gut, immune cells in the gut secrete inflammatory substances that call the attention of the neurons of the ENS. The ENS then initiates processes to rid the body of the pathogen. Another example would be how you gag when eating a food you don’t like.

The digestive tract is also a microbiome, a home to many different kinds of microbes. These microbes produce about 50% of the dopamine and 90% of the serotonin found in your body, both of which are neurotransmitters that affect mood, happiness, and pleasure. The microbes in your gut can also influence your eating habits for their own survival, as they can send signals to the brain via the vagus nerve to tell you to eat foods they prefer. Furthermore, current research indicates that a healthy microbiome in the gut can act as an indicator of emotional and mental health. Mice without any bacteria in their gut exhibited social traits similar to those seen in humans on the autism spectrum. These traits were not shown after the mice were fed certain probiotics that would cultivate healthy microbiomes.

Aside from performing digestive functions, the ENS seems to play a part in how we feel. When we eat foods with fat and sugar, good sources of energy, our bodies release dopamine, a neurotransmitter associated with pleasure. This mechanism, which developed over time, causes us to continue to eat foods high in fat and sugar. According to Belgian researchers, specific components of food can lead to the gut sending signals to the brain, and that the brain processing of these kinds of bodily signals regulate emotions. One study shows that fatty foods can make you feel better. In this study, there were two sets of volunteers: one set was given a dose of fatty acids, and the other was given saline. When exposed to images and music designed to make them sad, the fatty acid group reported feeling only half as sad as the saline group.

With what is now known about our two brains, researchers are looking into electrically stimulating the vagus nerve with a small pacemaker as a treatment for treatment-resistant depression. They hope that mimicking the vagal nerve activity of a person with a healthy gut could possibly prove effective. Additionally, researchers believe that performing gut biopsies can allow them to make early diagnoses of brain problems, as neuron changes in the gut could possibly indicate similar changes in the brain. Other researchers have also been able to identify neural stem cells in the gut, which have the theoretical capability of developing into all kinds of neurons and can be used to treat mental illness.