The Fabric of Fabricating 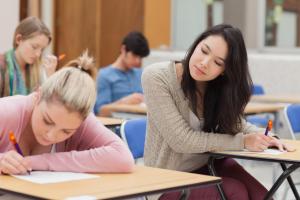 Photo courtesy of The Haute Mess

Sweat drips down your face; hands are trembling; your stomach is tied up in knots. You’re nervous about your upcoming biology test, but you know you do not really have to worry about it because Suzie sits right next to you and she usually has the answers.

Cheating is wrong. In society, it has become easier to cheat. Not only can students look at the paper of their classmate who is sitting next to them, but they can also chat with their friends and peers online during class or an online test. According to The New York Times article, “Studies Find More Students Cheating, With High Achievers No Exceptions”, Richard Pérez- Peña states that cheating has become universal and continues to spread.

Experts say that the reason why students cheat is very simple: it is easier to do and has become more widely tolerated. Both schools and parents have failed to give students strong, repetitive messages about cheating and copying their peers’ work.

“I don’t think there’s any question that students have become more competitive, under more pressure, and, as a result, tend to excuse more from themselves and other students, and that’s abetted by the adults around them,” says Donald L. McCabe, a professor at the Rutgers University Business School and leading researcher on cheating.

Studies of student behavior and attitude have shown that the majority of students violate academic standards to some degree. “There have always been struggling students who cheat to survive,” McCabe said. “But more and more, there are students at the top who cheat to thrive.”

A study by Jeffrey A. Roberts and David M. Wasieleski at Duquesne University found that the more online resources college students were allowed to use, the more likely they were to copy the work of their friends and peers.

Multiple projects and research studies have shown that by routinely reinforcing standards, cheating can diminish. As reported by Pérez- Peña, experts say that most schools fail to state their messages clearly. A 2010 survey of undergraduates at Yale showed that most of the students had never read the school’s policy on academic honesty and most did not know the rules of plagiarizing or recycling their work.

Dr. Erika Brennan, a science teacher at Immaculate Heart Academy, believes that cheating is absurd and dishonorable.  “I believe students cheat because they are under a lot of pressure for their grades either from themselves or from their parents or because they think they need certain grades for colleges,” she says.

Dr. Brennan takes cheating and plagiarizing very seriously not only in her own classroom but in the lunchroom and hallways as well. Dr. Brennan does not tolerate students talking about one of her exams during lunch to other students who have not taken it. Besides copying something down from a piece of paper, she believes that talking about a test is another form of cheating as well.

When asked if she believes that cheating could be abolished, Dr. Brennan responded, “I think it is hard to totally stop it, but I think we need to keep talking about what constitutes as cheating by constantly reminding students what is not allowed. Then we need to enforce it.” Dr. Brennan speaks the opinion of many other teachers and parents. She believes that students do not take cheating seriously. She also says that if students saw the consequences of their friends’ cheating, they would take it more seriously.

Dr. Brennan believes that students who do their own work are more confident within themselves, and they get more respect from their teachers than students who cheat and plagiarize.

Students agree with Dr. Brennan on the issue. Some have admitted that they have cheated before, but know that it is wrong and would never do it again. The two girls being interviewed are sophomore students at IHA, and have asked to be anonymous. They understand that IHA has very strong messages about cheating and plagiarizing and would never consider doing it. IHA has strict punishments for anyone who cheats, including getting expelled from the school, or getting a zero on an assignment. “Cheating might get you a good grade on a test, but by copying someone’s work you’re not being independent. You’re also not learning the material being presented in the assignment. Cheating doesn’t really have any positive affects and I think people just do it because they’re lazy,” one of these IHA freshmen said.

This is another example of why cheating does not benefit anyone. Students are not learning or understanding the material by copying it. Just getting good grades does not make a person smart, they have to be able to recall the material and apply it to their life. 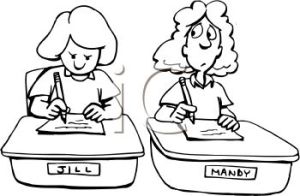 Students cheat because they think they can get away with it. “Students believe it is okay to cheat because as long as they don’t get caught they take the easy way out,” the second sophomore student commented. It is better to get a bad grade on an exam, and know you did the work by yourself, because you could always go to teachers for extra help. The teachers would rather the students approach them saying they do not understand the material than have the students get a better grade on the test by copying another student’s answers.

Parents tend to blame the teachers these days when students do wrong in class. Patricia Bertram Gallant, the author of “Creating the Ethical Academy,” and the director of the academic integrity office at the University of California at San Diego said that in our society now, we have trouble accepting that our children make mistakes and fail but when they do, we try and blame someone else.

She recalled giving integrity counseling to a student who would send her research papers to her mother to edit before she handed them in. The student thought that nothing was wrong with this practice. It turned out that one of the papers she handed in was entirely written by her mother, and completely plagiarized. Gallant asked the student, “So what’s the lesson here? And she said, completely serious, ‘Check the work my mom does?’” This is how far the extent of cheating goes. From the studies shown, cheating needs to be taken more seriously, and in order to stop it from spreading.