Social Media As We Know It 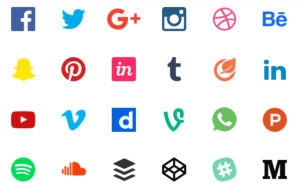 Social media has become a popular place for people to express their opinions and feelings on any matter, trivial or important.
Photo courtesy of dlvr.it

Unacceptable! Haughty! Ignorant! Offensive! SO un-cool! Teenagers of this generation are attached to social media, so much that they post whatever they feel!

This past April, a group of boys from Princeton High School’s class of 2016 were playing beer pong at a house party, among other party activities. However, one party game was racist and offensive. These boys were playing Nazis vs. Jews beer pong, also known as Alcoholocaust. Not only were the boys arrogant enough to play this offensive game, but they also posted it on social media.

According to my cousin, Kate Wenzler, a then junior at PHS, now senior, many peers and friends saw the post and instantly screenshotted it, including herself. I know I would do the same.

Yet Jamaica Ponder, another junior at PHS, took this screenshot a step further. She wrote an article about it on her blog, which is still up today.

While reading her vivid blog post, I felt anger toward these boys. Ponder stated in an interview with ABC News, that she had asked the boys to shut down the game because she was sticking up for her friend who was Jewish. The teens replied, “Stop being a party pooper,” Ponder stated. As a result, Ponder and her squad left the party. 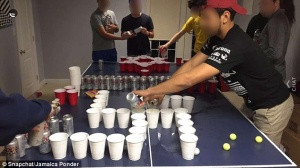 The group of Princeton high schoolers who played an offensive game and posted it on snapchat Source?
Photo courtesy of Jamaica Ponder

My question to the boys is, why? Why would one of them post that on social media? Now the boys are facing serious consequences. One senior even got his college scholarship revoked for baseball.

The ignorance of these boys! I cannot process how Jews, at the house party, helped assemble the cups into the Star of David, and the others cups into a swastika. Even though they didn’t participate in the game, did they not feel uncomfortable at all assembling the cups?

I’m not even Jewish, and yet I’m deeply offended. Not to mention there was a cup especially dedicated to Anne Frank. I have much respect for Anne Frank because of her strength through the Holocaust, and for what! To be shamed for her religion in an idiotic game!

I believe it was the right thing for Ponder to stand up for what she believes in and correct these boys for their wronging. However, Ponder seized the opportunity to post her opinion on social media, on her public blog, for everyone to see. Which is ironic, primarily because that is how the boys got in trouble, through social media. I would’ve approached the situation differently. For example, I would’ve told the boys’ parents or a school authority.

The boys have made their mistakes and there is no taking their actions back. I hope children, teens, and adults of this and many generations to come learn a valuable lesson from the boys’ thoughtless actions.

Be careful of what you post online because no matter how many times you delete a picture, comment, or video, it is out there forever.