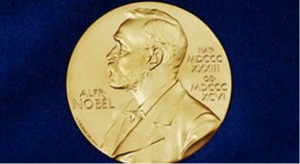 The medal that is awarded to Nobel Peace Prize Winners.
Photo courtesy of the Nobel Prize

Nobel Prize winners for 2016 were announced last month. This year, 11 people have been awarded a prize across three categories.

Each year the Nobel Institute distributes awards in the areas of physics, chemistry, physiology or medicine, literature, peace, and economic sciences. According to the Nobel Institute, winners are chosen from a list of nominations, which must be submitted by approved nominators.

The Nobel Committee narrows the nominations down. From these candidates, the Nobel Institute’s permanent advisors present their reports on each of the candidates. After discussion, the advisors collaboratively select the final Nobel Prize winners.

David J. Thouless was awarded ½ of the physics prize. F. Duncan M. Haldane and J. Michael Kosterlitz each were awarded ¼ of the physics prize. The three were awarded for their discoveries in topological phase transitions and topological phases of matter. According to The New York Times, the three worked to understand unusual states of matter that produce strange effects.

Jean-Pierre Sauvage, Sir J. Fraser Stoddart, and Bernard La Ferigna all received ⅓ of the chemistry prize. They were awarded for their molecular machines. According to Nature, they designed and developed machines at the molecular level. These machines are typical machines, just much smaller. For example, they designed switches and axles.

Yoshinori Oshumi was awarded the full Physiology or Medicine prize. He was awarded for his “discoveries of mechanisms for autophagy.” According to the New York Times, he helped to research the “self-eating cell.” This process is called autophagy and is often not functional with many diseases, such as cancer and immunological diseases.

The Nobel Peace Prize was awarded to the president of Columbia, Juan Manuel Santos.
Photo courtesy of Inquisitr

Bob Dylan was awarded the entire literature prize for his creation of “poetic expressions” during “America’s song tradition.”

Juan Manuel Santos, President of Columbia, also received the full award for peace.He was awarded for his dedication to achieving and “end to a 50-year long civil war.”

Finally, Oliver Hart and Bengt Holström evenly share the Economic Sciences prize. They are awarded for their advancements on the contract theory. According to PBS, this is a theory about contracts based on incentive. Holström’s work was in balancing incentive and risk. Hart’s work was the study of incomplete contracts.