Second Attempt at the PSAT

In my opinion, standardized tests do not irritate me, and I typically do not dread taking them. I have been taking standardized tests throughout my academic career, and can still remember walking into my third grade classroom and taking my first standardized test, the NJ ASK (New Jersey Assessment of Skills and Knowledge). When I look back at my middle school years, I remember taking tests such as the TerraNova. By the time I reached the month of November in 8th grade and it was time to take the COOP, I felt comfortable and was familiar with the general style of standardized tests.

I do, however, feel that standardized tests are excessively emphasized, and that even the most excellent student can have a bad day and produce test scores that do not accurately reflect who they are as a student. 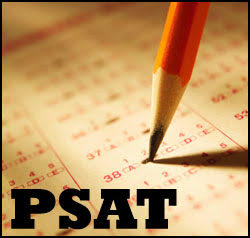 Freshmen year, when I took the Preliminary SAT/National Merit Scholarship Qualifying Test (PSAT) for the first time with little knowledge about the test and little preparation for it, I was expecting an exam very similar in structure to the COOP. However, I discovered after taking the test that morning in March that the PSAT was structured very differently and had a different layout compared to the COOP exam. I found myself pressured for time and racing to finish sections during the PSAT, where as with the COOP exam I remember having an adequate amount of time for each section and did not feel pressed for time.

I remember receiving an email from Kaplan Score Return in late April, a few weeks after I took the PSAT. I curiously opened the email, hoping that I had scored well. For my first attempt at taking the PSAT, I was pleased with my results overall.

After what felt like a somewhat successful first attempt at the test in March, I decided that over the summer I would lightly prepare in hopes of feeling more confident while taking the test as a Sophomore. Although I knew that the PSAT did not count in Freshmen year or Sophomore year, I wanted to see if preparation would help my performance on the test. Over the summer, I worked on practice tests from several different brands, including Kaplan, Barron’s, Princeton Review, and McGraw-Hill, in hopes of improving my knowledge of the setup of the test.

On Wednesday, October 19th, I took the PSAT for a second time. When I took the PSAT this year as a sophomore with more knowledge about the test, I felt that it went much better and smoother, especially because this time I was accustomed to the time allotments. Overall, when I left the testing room, I felt relieved and glad that I was finished taking the test, and I felt fairly confident with my work. I am interested to see if my scores will improve this year.

Although I still have two years until I am a senior and take the official SAT, I believe that the Preliminary SAT is a great way to introduce the SAT to underclassmen in high school. I feel that taking the PSAT several times will help me prepare for and achieve the score I want on the SAT.