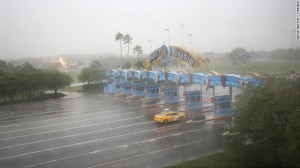 Hurricane Matthew struck the southern coast of the United States earlier this month. The storm was identified as a Category 1 hurricane and hit the coast of Florida on Thursday, October 7th.

The storm continued to hit South Carolina and surrounding states. There were reports of winds up to 130 mph, but few reported deaths in the United States. A state of emergency was declared in Florida, Georgia, and the Carolinas.

Haiti was also struck by the powerful storm and the country reports death counts of at least 300 people, though some say there are more than 800 victims. Many residents of areas where the storm was predicted to hit evacuated their homes early in the week to avoid its horrible effects.

The IHA cross-country team cancelled their trip to Disney for Columbus Day weekend due to this impending storm. The girls on the team had been training hard for this competition since mid-August, but unfortunately Mother Nature had other plans.

The competition was set to take place at ESPN’s Wide World of Sports Complex in Disney. Due to the storm, the entire event was cancelled. Set to be their second appearance at the competition, the girls would have been returning as defending champions in the JV and Varsity divisions.

Team member Jackie Townsend’18 commented on the disappointing news, saying, “We were all really excited to go because we knew that we were in great shape and could win it, so seeing that it was cancelled was devastating to all of us. The night before we were set to leave we made shirts and were all so pumped to go, so once we found out we couldn’t everyone was in tears”.

The girls will continue to train hard to represent their school for the remainder of the 2016 season and are looking forward to attending the competition in 2017 with hopes of another victory.