No Action, No World

In the twenty first century, it is no secret that the world faces a scary reality: climate change. If nothing is done to stop climate change by the year 2100, the world could face widespread extinctions, a dramatic increase in wildfires, dead fish, a limited supply of water, and more.

The evidence that humans are mostly the cause of global warming is strong, even though only half of Americans believe so, according to the Yale Project on Climate Change Communication.

According to NASA, “97% or more of actively publishing climate scientists agree: Climate-warming trends over the past century are very likely due to human activities. In addition, most of the leading scientific organizations worldwide have issued public statements endorsing this position.” The Yale Project on Climate Change Communication found that only 10% of Americans are aware of this fact.

By the end of the century, the Earth could heat up by as much as four degrees Celsius, compared to pre-industrial levels. This will cause catastrophic effects that every country around the world will suffer from. 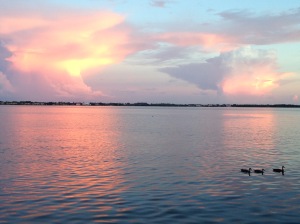 A rise of even a mere 2 degrees Celsius in the Earth’s temperature would submerge land currently lived in by two-hundred eighty million people, according to Climate Central, a UN-based research group.

Ocean levels could rise as much as thirty-two inches by 2100, compared to levels recorded between 1986-2005, found by the UN Intergovernmental Panel on Climate Change (IPCC) in a recent assessment. In addition, global warming could cause a humanitarian crisis, including the spread of diseases, an increase of climate refugees, and a decrease in crops available to harvest.

An interactive site called Global Weirding shows how the planet might change over the course of the century if no action is taken against climate change. The website is based off of the IPCC Climate Change 2014: Synthesis Report.

A “business as usual” emissions scenario would “lead to a very high risk of severe, widespread and irreversible” impacts, according to the IPCC.

The United States has contributed the most to climate change in the entire world. According to the PBL Netherlands Environmental Assessment Agency, the United States is expected to have released over 600 gigatons of carbon dioxide emissions by the year 2030.

What can the average person do to help the issue? Thankfully, there are many options. Some of them include insulating homes, replacing standard light bulbs with energy-efficient compact fluorescent bulbs, or switching to “green power.”

Easier ways to help include choosing to walk, bike ride, or take public transportation whenever possible. Turn off water while brushing teeth or shaving. Make sure to recycle anything possible, and repurpose clothes and household goods.

IHA AP Environmental teacher, Ms. Lauren Fitzgerald, says, “I think it is extremely important in our society that the future generations of the world are highly educated about the environment, and the impacts humans have on it. Often times, when we do not have a personal connection to environmental issues we do not care enough to change our lifestyles. Hopefully learning about the topic will change that.”

A Yale survey in 2015 found that 74% of Americans say they rarely or never hear someone they know talk about climate change. The IHA community can be a part of this solution by simply discussing the topic with family and friends. This is an easy way to help in spreading awareness about this critical issue.

IHA junior, Morgan Honor, says she is eager and willing to help solve climate change. She says, “If we as a human race do not find a solution to this problem, then our ecosystem could change for the worse as well.”

In the words of President Barack Obama during his 2015 State of the Union Address, “No challenge poses a greater threat to future generations than climate change.”