The Canadian company that owns this tennis-sized diamond, Lucara (LUCRF), claimed that the diamond was the biggest one found in around 100 years. The diamond, named Lesedi la Rona, is a 1,109-carat diamond, estimated to be around 2.5 to 3 billion years old. The company’s shares went soaring after the discovery of the gem.

The largest diamond, named “Cullinan Diamond” was found in 1905 in South Africa. The diamond was a 3,106-carat diamond. A piece of it is on display at the Tower of London today. This new diamond, the second biggest in the world, is up for auction on June 29th by Sotheby’s in London next month. It will be up for display at Sotheby’s New York on May 7th and from June 18th to 28th at Sotheby’s London. The expected price: $70 million dollars! 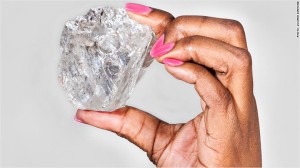 The diamond was discovered in Botswana in southern Africa in November. A public competition of more than 11,000 entries took place to determine the name of the diamond. The diamond was named “Our Light” in Setswana, the national language of Botswana. Why did it take so long to determine the price of the diamond? Its size. The large size made it extremely difficult to fit into conventional scanners used to evaluate a stone’s potential.

Sotheby’s Jewellery Division chairman, David Bennett, described the discovery of the diamond as “the find of a lifetime,” according to CNN.