The show began with Coldplay alone playing one of their most well known songs “Viva La Vida” which pleased audiences. After Coldplay sung parts of two other songs, the show was then directed to Bruno Mars and his dancers performing his most recent hit “Uptown Funk”.

After Bruno Mars delivered with his performance, Beyoncé performed her new song “Formation”, followed by a dance off between Bruno Mars and Beyoncé. Later all three of the performers, Beyoncé, Coldplay’s Chris Martin and Bruno Mars, got together and sung the rest of “Uptown Funk” together. 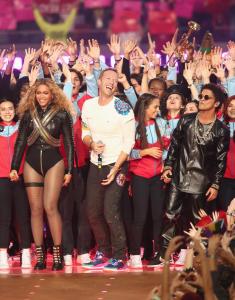 The performance then cut back to Coldplay and showcased probably the most memorable part, the slideshow of all previous halftime performances. This seemed to be the most popular part of the event. Both Alyssa Quicosa ’19 and Clare Donnelly ’19 said, “It was really cool how they put together all the past halftime shows.” It was the most memorable and intriguing Super Bowl halftime for many people. It meant a lot because it was the fiftieth show and to see a montage of all the previous halftimes was an impressive touch.

Many people seemed to like the show and all it offered. However, with all performances, Super Bowl or not, there were some skeptics. People were questioning some parts of the entertainment and even the choice of artists put together.

Clare Donnelly ’19 said, “I liked the show overall but I thought it was an odd group of artists to put together.” She also said, “I feel that the order of the acts made Coldplay be overshadowed. It was their Super Bowl show.”

The writers from Variety put it in the perfect words, “it made Coldplay feel more like an opening act.” Although it was impressive to many people of all ages, it did not beat any shows from the past. This performance was not as spectacular as ones the public has seen in the past but it still brought entertainment to those who may not be such big football fans.