The New Apple TV Is Better Than Ever 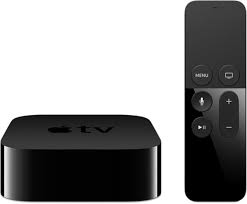 The fourth-generation Apple TV was an item found on many wish lists this past Christmas. According to data from AppleLovin, usage of the device grew thirty-six percent just between December 24th and December 26th.

What exactly does the newest model of the Apple TV have? The Apple TV begins by recognizing the fact that apps are the future of television. The Apple TV is built on this idea. One of the most important features of the fourth- generation Apple TV is its search feature. It allows for the user to ask Siri content questions and get results back from many media sources. This includes iTunes, Hulu Plus, Netflix, HBO Now, and Showtime.

This search feature resembles iOS 9’s Spotlight Search, allowing you to find video-streaming apps and services. The feature permits the user to search for movies and television programs using his or her voice, instead of hastily switching back and forth between different apps.

Apple TV makes it easy to catch all the latest entertainment through its renting or purchasing option on iTunes. Users have access to single episodes or whole seasons of television shows. Movies become available on iTunes on almost the same day that it becomes available on DVD and television shows are often available the day after they air. Entertainment has never been quicker or more efficient!

No one can forget about the App Store on Apple TV. The Apple TV will transform your living room. There is no longer a need to go out for family game night! With its incredible home theatre sound system, games will appear bigger and grander than ever in the users own homes.