The Arts, Culture, and Theater Club, better known as the ACT Club, went to New York City to see the musical, Les Misérables. On Thursday, November 12, all of the students participating in the trip gathered at IHA, and then boarded on a bus to commute into the city. It may sound chaotic trying to transport so many students into the city, but one of the club moderators, Ms. McNulty, described how it is done.

McNulty explained that, “This is the second year that the ACT Club is going to New York City, and [the club moderators] have a system that we use.” When asked what the most difficult part of the trip was, McNulty said that “The hardest part is coordinating the buses to figure out how early to leave, so [we] don’t hit rush hour but get there on time.” 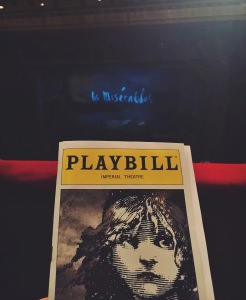 After the students arrived in New York and entered into the theater, they finally got to sit back and enjoy the show. When asked about what she thought of the show, Casey Conniff ’19 said, “It was a really good show, and I thought the show was very well put on and the singing was really good, and it was overall a nice experience.”

After the show concluded, the students returned back to IHA. IHA was closed for students the next day due to faculty retreats, so these students also got to sleep in after their night on the town.