The United States was honored to welcome Pope Francis for six days during the end of September.

The Pope kicked off his trip in Washington DC, where he was met by President Obama on the tarmac at Joint Base Andrews. The following day, Pope Francis attended a welcoming ceremony at the White House and had a personal meeting with the president.

On Friday, September 25th, Pope Francis addressed the United Nations General Assembly in Manhattan. One important topic the Pope discussed with the world leaders was environmental justice. He borrowed many ideas from his recent encyclical, Laudato Si, including humans’ thirst for material goods. He said, “A selfish and boundless thirst for power and material prosperity leads both to the misuse of available natural resources and to the exclusion of the weak and the disadvantaged.”

Pope Francis also spoke out about poor and underdeveloped countries, and the UN’s responsibility to aid them. He insisted that the United Nations make sure that poor nations have access to basic necessities, “lodging, labor and land.”

His comment on human dignity resonated with many and signaled a thunderous applause. “The common home of all men and women must continue to rise on the foundations of a right understanding of universal fraternity and respect for the sacredness of every human life, of every man and every woman, the poor, the elderly, children, the infirm, the unborn, the unemployed, the abandoned, those considered disposable because they are only considered as part of a statistic.” 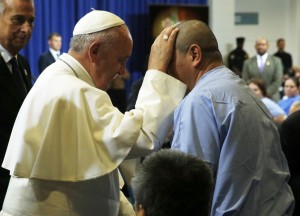 Pope Francis spent the last two days of his memorable trip in Philadelphia. One of the many interesting appearances Pope Francis made in the city was at the Curran-Fromhold Correctional Facility. There, 100 inmates in the prison had the tremendous opportunity to hear the Pope speak, and the highest icon of the Catholic Church blessed a select few inmates.

Pope Francis sat in a beautiful wooden chair that the inmates built for him, which he graciously thanked them for. The Pope has openly criticized the prison system in the past, but focused his attention on his solidarity with the prisoners in his speech. He said, “This time in your life can only have one purpose: to give you a hand in getting back on the right road, to give you a hand to help you rejoin society. All of us are part of that effort, all of us are invited to encourage, help and enable your rehabilitation.”

On Sunday, September 27th, the Pope departed for Rome. Although Pope Francis may not return back to the United States, his influential words and encouraging acts will impact the country, and the world, for years to come.