The Papal Visit: A Student’s Experience 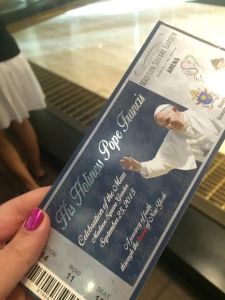 Imagine the most joyful and exciting moment of your life.  Now, multiply it by ten and that will give you an idea of what it was like to be in the presence of Pope Francis when I had the privilege of attending the Papal Mass that took place at Madison Square Garden on Friday, September 25th.

Since people had to be inside the Garden two and a half hours before the Mass began, there was a show called “A Journey to Faith,” which included special guest singers such as Harry Connick Jr., Jennifer Hudson, and Gloria Estefan.  By itself, that was a world-class event but, in this case, it was only the opening act.  The best was yet to come.

The Mass was a magical experience that combined some of the best singers with deacons and priests from around the world.  In his sermon, the Pope spoke of the great character of the city of New York.

Pope Francis ended the Mass with a few simple words that demonstrate the amazingly humble man of God that he is: “Don’t forget to pray for me.”
In my opinion, it was an experience like no other. Being in the presence of the leader of the Catholic Church on Earth was an unforgettable event and I, like all the other attendees, left feeling truly uplifted.