It’s a Girl for the Duke and Duchess of Cambridge 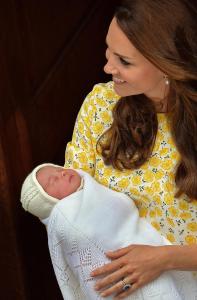 Charlotte Elizabeth Diana was welcomed into the world on Saturday, May 2nd. She will be referred to as Her Royal Highness Princess Charlotte of Cambridge.
Photo Credit: NBC News

The baby’s name was announced on May 4th as Charlotte Elizabeth Diana. Her official title is Her Royal Highness Princess Charlotte of Cambridge.

Princess Charlotte will be fourth in line to the throne–the closest any female has been since the queen.

Her name is a nod to both her maternal and paternal lineage. Charlotte is a feminine form of Charles (her grandfather). It is also the middle name of Pippa Middleton, Kate’s sister. Elizabeth is meant to honor Charlotte’s great-grandmother, Queen Elizabeth II. It is also Kate’s middle name. William and Kate chose Diana to pay tribute to William’s late mother.

“William has tried to include his mother in all the significant moments in his life…What I like about the placement of the name is it is included so as to pay tribute to Diana, but not to be a burden as she grows up, “ CNN’s Royal Commento, Victoria Arbiter, explains. “Already the British papers are saying ‘this is our new Diana,’ they are calling her the ‘People’s Princess.’ It is a heavy burden to carry, so by putting Diana as third, it is paying tribute, it is including her, but it removes the sense of burden. It is brilliantly done.”

People have been betting on the name for weeks and Charlotte was the top contender followed by Alice.