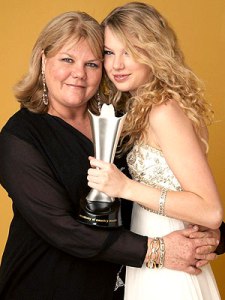 Taylor Swift smiles with her mother after winning at the 43rd annual Academy of Country Music Awards. Swift’s mother has been diagnosed for with cancer, but the family is not disclosing any other information at this time.
Photo Credit: People Magazine

Taylor Swift posted to her Tumblr account on Thursday, April 9th, informing fans that her mother, Andrea Swift, known to fans as Momma Swift, has been diagnosed with cancer.

Swift wrote about how she had asked her mother to get screened for any possible health issues as her Christmas gift that year. Her mother obliged, and at first, everything seemed fine, but it was later found that she had a type of cancer that the Swift family has chosen to not disclose with the public.

Swift, who considers herself close to her fans, wrote, “Usually when things happen to me, I process them and then write music about how I feel, and you hear it much later. This is something my family and I thought you should know about now.”

The Swift family is using this news to call to attention the importance of getting screened for any and all medical conditions.

“Your parents may be too busy juggling everything they’ve got going on… and maybe you reminding them to go get checked for cancer could possibly lead to an early diagnosis,” Swift wrote on her social media account.

She ended by thanking her fans for caring so much about her family. She also offered prayers that no one else has to get news similar to the type that her family has received. Fans were quick to show support for the Swift family and offer their prayers to her as well.