Two bodies were found in the rubble on Sunday from a building that collapsed last Thursday in New York’s East Village explosion. 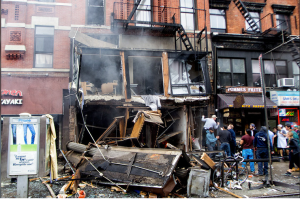 A gas-related explosion in Manhattan’s East Village last Thursday resulted in a partial building collapse. Some people were reported missing, but two bodies were found in the rubble on Sunday.
Photo Credit: CNN

Although the bodies have not yet been identified, police believe that these are the bodies of two people who were reported missing after the explosion. The men, Nicholas Figueroa and Moises Locon, were believed to have been at a sushi restaurant at the time of the explosion.

Crews are still searching the area for more bodies, although this case is highly unlikely.

The explosion Thursday caused a violent gas-fueled fire, which resulted in three buildings collapsing and four other buildings being damaged.

No more details have been shared since the investigation is currently ongoing.