When Becky Hammon steps out on the court for the first NBA game of the season, it’s just another day pursuing her dream and passion. To everyone else, however, it marks the first woman to ever be assistant coach for a team in the NBA.

After her 16th season in the Women’s National Basketball Association, she decided to retire from playing basketball professionally. Just a short while after her retirement, she received an offer from the San Antonio Spurs. Hammon accepted the offer, making her the first woman to coach an NBA game. 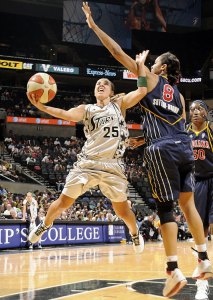 Hammon’s whole life has been around the game. She was always bouncing a basketball around the house, even as a toddler. Her father loved the game as much as she did and coached basketball for nearly three decades.

In her hometown of Rapid City, South Dakota, there weren’t many basketball players when Hammon was young. The only way for her to play was to play in the boys’ leagues.

“When I was better than all the boys, even a grade, two grades ahead of me, they were like, ‘Oh yeah, she can stay’,” Hammon said.

In 1996, Hammon enrolled at Colorado State and played basketball. In her time there, she broke the school record for points, points per game, free throws, three-pointers, steals, and assists. Later, her number would be retired and she would be honored in the CSU hall of fame.

Hammon’s road to the WNBA and coaching wasn’t always an easy one. She is much shorter than the average height of a basketball player, as she is barely 5’6”.

Hammon dribbles the ball down the court in one of her college games against UCLA.
Photo Credit: Colorado State University

“I’m small for a basketball player. I don’t look like a basketball player. I’m a typical underdog story. My journey has been one of a lot of doors being closed, a lot of people saying I wasn’t able to,” Hammon said. “Yet if you know me—my character, my personality traits—you know I love challenges. I love proving people wrong. Just trying to be the best that I could possibly be was a big enough motivating factor for me. It got me through a lot.”

In 2007, Becky Hammon started playing for the San Antonio Stars. She also tried out for the U.S. Women’s National Team. When she didn’t get a call back from them, she was devastated and accepted an offer to play in a Russian League.

In her time in the WNBA, she became one of the 15 all-time top players in the league. Hammon is often referred to as a trailblazer. Many people praise her for paving the way for women in the NBA, but she sees it differently.

“I’m a little uncomfortable with people saying ‘trailblazer’ and this or that because I know somebody else blazed the trail for me to even have the opportunity to play basketball. I never want to lose sight of the women who came before me and laid the groundwork for me to be able to walk through this door,” Hammon said.

Before the Spurs even hired her, they watched how she communicated with members of her team in the WNBA. All of the staff respect her as a basketball player and believe that she is the right person for the job. As for her coaching, Hammon helps the players with their shooting techniques. She works mostly with the point guards but attends practices and meetings as well.

“She’s not just a good player but a smart player, a great person in our community, just somebody that we all respect so much, we gave her the opportunity to sit with us during the year,” said Head Coach Gregg Popovich.“She came to our coaches’ meetings, argued with us. She did everything. She’s been wonderful.”

Although her future as head coach is unknown, she will continue assistant coaching for San Antonio Spurs alongside Popovich. All of the members of the team have a lot of respect for her regardless of what people think of her basketball knowledge. Hammon has not expressed any eager interest in taking over for Popovich, and is happy with her position right now.

“I’m in a space where I want to keep learning. I’m learning from a really intelligent human being, not just in basketball, but in life. I want to continue to learn. I’ll make those decisions as they come. But I’m really happy where I am,” Hammon said.