The first quarter went by quickly, filled with strong defenses on both sides. It finished with a score of 12 to 7, Blue Eagles.

A steady pace remained in the second quarter with senior Katia Oge claiming a rebound and putting up a bank shot. The opposing team was quick to counter; Immaculate Conception’s Samantha Fuehring put up a three-pointer that kept the score in reach. However, the quarter still ended with IHA up seven points, 21 to 14.

Players Caitlin Roche, Alex Mesropyan, Steph Olear, Katia Oge, and Jordan Wilmoth began the half together. Starting off the half without hesitation, senior Alex Mesropyan dribbled down the court and took a jump shot from the foul line and just missed. Nevertheless, senior Stephanie Olear came to the rescue and secured the rebound, before putting up a jump shot of her own and adding two points to the score.

The competitive match became aggressive when Mesropyan drove down the court once more, only to be fouled under the basket. She sustained a knee injury that left her unable to get up at first, but with help from her teammates, she was able to stand. As she made her way to the foul line, people from the opposing stand stomped their feet to distract her making her shots, but she succeeded in making both.

Caitlin Roche ’15 takes a foul shot as her teammates anticipate the rebound. Roche finished the game with a total of nineteen points.

IHA called a timeout with a minute and thirty-three seconds left in the third quarter. Once the girls walked back onto the court, IHA’s cheerleaders began to chant “Eagles” and “Be aggressive!”

And aggressive both teams were.

At the start of the fourth and last quarter, both Jordan Wilmoth and Caitlin Roche were fouled. This tallied the Blue Wolves’ team foul count to seven, allowing IHA to take a shot at the foul line. When the team foul count hits seven, players from the opposing team are offered two foul shots. The opposing team is allowed to intervene after the first shot.

Caitlin Roche was brought to the line after being fouled several times and made the majority of her foul shots with ease.

The IHA varsity basketball team members rejoice as they claim their second Bergen County Championship in a row.

With only forty-six seconds left, IHA began to run out the clock by passing to each other and not taking any risks. The clock ran out and the buzzer sounded throughout the gym. Every teammate from the Blue Eagles ran onto the court and formed a huddle filled with cheers.

The Blue Eagles championed over the Blue Wolves, 50 to 38.

“It was definitely an intense win,” says forward Jordan Wilmoth. “Playing against a well-rounded Immaculate Conception team with a McDonald All-American [Samantha Fuehring] in their lineup definitely brought a lot. I knew that it would be a tough game, but towards the end, I knew were bound to claim another Bergen County title. We simply stuck to the game plan, played with intensity and kept our composure!”

As the two teams line up, some players from opposing teams hug because they are teammates on organizations outside of their high school teams.

The award ceremony then commenced with Immaculate Conception receiving its runner-up award first. The championship trophy was then awarded to head coach Steve Silver, who invited seniors Caitlin Roche and Alex Mesropyan to bring the trophy over to the rest of their team members. When the trophy reached the rest of the team, the girls erupted in cheers and held it above their heads proudly. 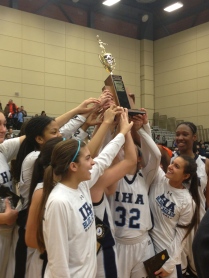 Katie Jones ’17, Caitlin Roche ’15, Rebecca Garcia 16, Jordan Wilmoth 16, Katia Oge ’15, along with other teammates lift their trophy up together.

The athletes were then awarded their individual plaques for their success in becoming the 2015 Bergen County Champions.

When asked if she believed IHA would finish out the year with another New Jersey State Championship (making it their second state win in a row), Caitlin Roche stated, “I have full confidence and belief in my team to bring home another state championship as long as we keep working hard and stay focused at the task at hand. We have the capability to do anything we set our minds to and the possibilities are endless.”

Working hard and staying focused at the task at hand is just what the committed team has been doing. IHA has recently won the state sections and are advancing quickly.

The team’s next game is against St. John Vianney this Saturday, March 14th in Toms River’s Pine Belt Arena. 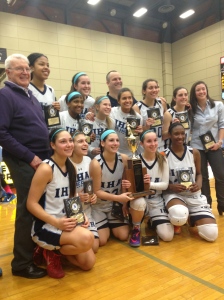