A 10-year-old boy’s dream came true! He was given the chance of a life time to meet Adam Levine and his band, Maroon 5. 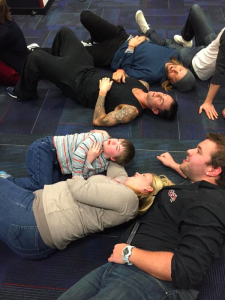 Maroon 5 members lay with Christopher backstage while he panicks from meeting them for the first time. Photo Credit: today.com

The boy, Christopher Warner, suffers from Down Syndrome, which is a disease that causes intellectual impairment and physical abnormalities.

Christopher got to meet Maroon 5 on Monday, March 2nd because of a video that went viral on YouTube, made by a special education teacher, Avery Stanert, at his school. Radio hosts at Hot 99.5’s The Kane Show discovered the video and wanted to do something about it.

“They arranged for backstage passes and tickets,” Stanert said. “They immediately called the record label and worked it all out.”

Maroon 5 was nothing but kind to Christopher. They wanted him to have the best experience possible.

“He was very shy at first. I kind of got down on the floor and he was hiding behind me,” Cecilia told ABC News. “Then Adam said ‘That’s OK, we’ll all get down on the floor.’ It wasn’t beneath him to lay down on a locker room floor with Christopher.”

“We’ve been really happy to see how Down Syndrome has gotten a lot of attention for this,”  Stanert stated. “Kids with Down syndrome are just like their peers.”