SNL Pulls Out All the Stops for 40th Anniversary Special

The 3 and ½ hour show was jam-packed with countless appearances by SNL alumni, past celebrity hosts, and musical guests over the show’s 40 seasons.

The show began with a musical number cold open by Jimmy Fallon and Justin Timberlake, rapping a medley of the show’s famous catchphrases. Then Steve Martin took the stage for the opening monologue, along with many other celebrity guests like Tom Hanks and Melissa McCarthy.

Many clips of past sketches were played throughout the show, but the best were the ones revived and performed live like Celebrity Jeopardy, The Californians, and Wayne’s World.

A trio of female anchors- Tina Fey, Amy Poehler, and Jane Curtin- returned to the Weekend Update Desk, as well as several beloved Weekend Update characters. Edward Norton did a hilarious impression of the famous Stefon, along with Bill Hader himself.

Maya Rudolph impersonated Beyoncé as she, along with Martin Short, performed a musical tribute to the show’s many musical sketches, which included appearances by SNL musical favorites like Kristen Wiig and Fred Armisen’s Garth and Kat, and Adam Sandler’s Opera Man.

Andy Samberg and Adam Sandler teamed up for a new SNL digital short about “breaking” during sketches, and Eddie Murphy finally made his long-awaited return to the SNL stage.

Many past musical guests also performed throughout the show, such Kanye West, Paul McCartney, Paul Simon, and Miley Cyrus.

The show not only brought in big laughs, but also a big audience. A total of 23.1 million viewers tuned in to watch the anniversary special, making it NBC’s most watched primetime entertainment telecast in over 10 years.

The high ratings for SNL’s celebration of 40 hilarious years only point to more success for Saturday Night Live in the years to come. 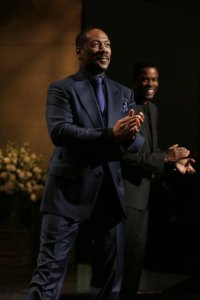