It looks like Adam Levine has a new skill to add to his resume; wedding crashing.

Frontman Adam Levine drives his car around LA in search for a wedding to crash. Photo Credit: People Magazine

Uninvited wedding guests are one of the worst things that can happen to any couple celebrating its big day – unless, of course, it is three time Grammy winners, Maroon 5.

Levine led his band in a series of surprise performances at several weddings throughout Los Angeles, all filmed on December 6th for its “Sugar” music video, which debuted on YouTube late Tuesday.

Bride and groom smile as they see Maroon 5 performing for them. Photo Credit: US WEEKLY

The video starts off with the band zipping off in a car and beginning a series of unannounced drop-ins in the middle of wedding receptions for several newly weds.

It shows the hit makers who are appropriately dressed in black tuxedos, as they dash through back entrances and make their way into the venues. Crews set up their stages with curtains to hide the band’s identity as they begin playing “Sugar,” the third single off their fifth album titled “V.” 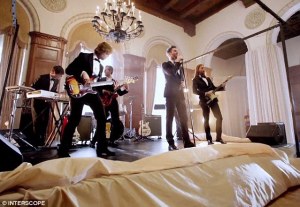 Maroon 5 perform one of their latest songs at wedding reception. Photo Credit: US WEEKLY

Although frontman Adam Levine’s voice is unmistakable, the bride, groom and guests are left in shock after the curtain drops and it is revealed that the night’s entertainment is the famous band.

It seemed to be quite the treat for the revelers, who react with tears, dropped-jaws, popped eyes, wide smiles and dancing. At one point, even Levine seemed to be moved by the event as he had watery eyes while singing on stage.

Following the performances, the band saluted the couples with champagne toasts and embraces.

The 2013 People’s Sexiest Man Alive explained in a statement,

“It was an out of body experience, I had no idea I would be affected by the overwhelming reactions we received from the couples and guests. Being able to create an unforgettable experience for several people was the highlight of it all.”

Who knows what the next Maroon 5 video might bring to the table, as the band is known for their out-of-the-box videos.