Thousands of police officers from across the country filled the streets outside of the funeral for Officer Rafael Ramos, who was killed in an ambush shooting with his partner, Wenjian Liu. 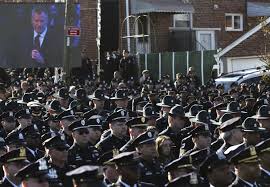 Although the day did focus on honoring Officer Ramos, the sore feelings between the New York City Police Department and Mayor Bill de Blasio did not go unnoticed. When de Blasio took to the podium to begin his eulogy at Ramos’ funeral, officers turned their backs on the screen displaying the service to the crowds outside.

This tension between the mayor and the New York City Police Department comes after de Blasio was criticized by NYPD union officials for contributing to the rising distrust in police officers that preceded the killings of Ramos and Liu.

Sgt. Myron Joseph of the New Rochelle Police Department stated that he and other officers turned their backs to de Blasio to “support our brothers in the NYPD.”

Ramos and Liu were the first officers to lose their lives in the line of duty since 2011. Announcements have not yet been made for a funeral for Liu.