People continue to gather to protest the death of Eric Garner six days after the Eric Garner jury decision.

Garner, 43, was selling untaxed cigarettes when police tried to arrest him. Garner refused and was put in a chokehold by Pantaleo–a white NYPD officer. Garner died, and the incident, which was captured on video, has caused much anger across the United States. 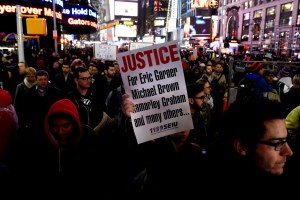 After the grand jury made the decision to not bring criminal charges to Patanelo, protestors took to the streets Wednesday evening. Since then, protests erupted all over the country in cities like New York, Boston, Los Angeles, St. Louis, and Chicago.

In New York City, protestors have swarmed places such as Times Square, Union Square, and Grand Central Station, and many have been arrested.

On Friday night, protestors shut down FDR Drive and took over a Macy’s and H&M on Sunday afternoon. On Monday, protestors blocked the Staten Island Expressway during rush hour.

The phrase “I can’t breathe”–Garner’s last words while being choked by police–has been painted on posters at protests and spread throughout social media.

The Garner decision comes shortly after the Ferguson decision on November 24, in which a grand jury also did not indict white police officer Darren Wilson who shot Michael Brown in August. Now, protestors call for justice for the death of the two black men and several deaths of unarmed black men and boys caused by police officers in the past few months.

These protests have President Obama’s support. “As long as they’re peaceful, I think they’re necessary,” Obama stated in an interview on Monday.

Protest efforts still remain strong across the U.S. as Obama’s administration strives to answer the protestors’ call for justice and better relationships between police forces and citizens.