IHA’s Musical “The Boyfriend” is a Hit

This past weekend, IHA put on its annual fall musical, “The Boyfriend,” which proved to be a huge success that audiences enjoyed.

“The Boyfriend,” a light-hearted comedy that spoofs musicals of the 1920s, tells the story of young girls at boarding school in France as they get ready for the evening’s ball.

Victoria Duffy (Junior) played the leading role of Polly Browne–one of the girls at the school. Polly is the daughter of a millionaire and worries that suitors are only interested in her for her money.

When Polly meets and falls in love with Tony Brockhurst, a messenger boy played by Nick Berninger, she decides to keep her heiress identity a secret. But little does she know that Tony is keeping a secret too: he is also an heir to fortune. 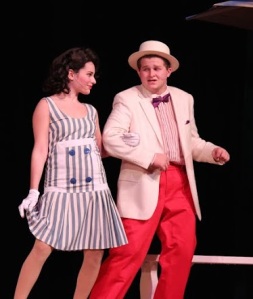 After two months of rehearsals and preparation, the show opened on Friday night, November 14th, and followed with two performances on Saturday and a special matinee on Sunday for grandparents. The talented cast and crew included boys from St. Joseph’s, Bergen Catholic, and Don Bosco Prep high schools.

For seniors, the weekend was a bittersweet end to their musical theatre experiences at IHA. Senior Molly Dudas said, “I’m going to miss it so much but I couldn’t have asked for a better cast to end with and I’m definitely proud of the show we put on.”

However, underclassmen who made their debuts on the IHA stage have plenty to look forward to for next year.

“I can’t wait for next year and the new family and memories it will bring. Next year will be amazing, but I know I won’t ever forget the family and the unbelievable memories that this show has created,” said Freshman Emily Hernandez.

Congratulations to the cast and crew of “The Boyfriend” for a fantastic production!