Is Social Media Actually All It Seems to Be?

Nowadays, almost everyone in the world is a smartphone owner and is quickly getting pulled into the giant bubble that is social media.

There needs to be set boundaries between every person and his or her social media accounts. It must be made sure that someone’s life does not revolve around an online persona.

Despite its title, “social” media is clearly making people less social. People are more focused on building-up their online identity than their personality in real-life.

Have you noticed that when you look around a restaurant, you see more people looking down at their phones, than people looking up and actually talking to one another?

You may think that you are becoming somewhat close to someone online, but when you see him or her in person and have no idea how to communicate – that is where the problem is.

Relationships are dwindling down and becoming more of an online affair, when they should be flourishing.

Another issue with social media is that some people portray their lives differently online than how they actually are. 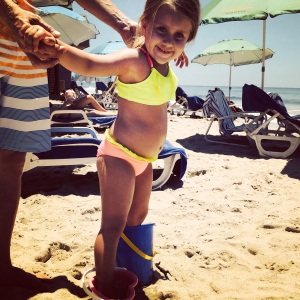 Huffington Post writer, Jenn Delekta incorporates photos of her daughter at the beach to show the difference between social media and real life.
Photo Credit: The Huffington Post

It is now quite common for a person to post a picture of him or herself on Instagram that looks nothing like how he or she actually looks. Or, with the help of editing apps, people will often post a picture of a landscape that looks incredibly better than its true value.

Social media can easily fool people into thinking things that are not actually there. Just like how personalities are different online, many images are as well.

A very important issue with social media is the danger of predators. With many kids online lately, people that prey on the young generation have put themselves online, as well.

It is known that predators look for young people online who look vulnerable. They will talk to them as a friend, trying offer consoling. Feeling like they have no one else to go to, kids often love the attention from the predator.

Jenn Delekta’s daughter enjoys a glorious day at the beach incorporates photos of her daughter at the beach, according to Instagram.
Photo Credit: The Huffington Post

“I trusted him wholeheartedly. He was a friend, no matter what.” At the age of 13, Alicia Kozakiewicz was abused, raped, and kidnapped by a man she met online. She admits that she trusted him completely and could tell him anything.

Many predators online also pretend to be someone that they are not. They make their profile picture someone who is not them, often someone younger and more appealing. These people are usually referred to as “catfishes.”

Young people often fall for the illusion of catfishes because it just seems like another kid online.

But that is not the case. It is just another way for predators to prey on young people.

Although there are many dangers that come along with social media, many people enjoy it and think it is a great way to stay in touch with what is going on.

Yes, it does have its benefits, but are they really more important than the social skills and safety of human beings?