On Wednesday, October 15, high school sophomores and juniors across the country took the PSATs while magic filled the halls of IHA. The IHA freshmen were having their very own Freshmen Spirit Day.

The theme of the spirit day was Disney. Every two homerooms were a team and each team was assigned three movies in which the students could choose a character to dress as. The team captains were the homeroom representatives of each homeroom

Ms. McNulty, the freshman class moderator, organized the day, along with the team captains.  The day started with a bagel breakfast. Some girls then went off to work on the banner while others designed the class t-shirts. After, the freshmen learned the Alma Mater in the ‘PAC.’ Team 4 won the sing-off.

The girls went to the gym afterwards and performed skits about “Once upon a time at IHA.” All the skits were hilarious but Team 2 was the winner. While still in the gym, the girls’ costumes were judged by some teachers. Team 5 was victorious in that event.

The last event was Jeopardy. The categories were IHA, Disney, and miscellaneous trivia. It was a high stakes game and the leaderboard kept changing. By the end of the game Team 4 had proven that they knew the most trivia facts.

The day ended with a tally of the scores from all the events. Team 4 came out on top, with Team 2 in a close second. All in all, it was an enjoyable day for the freshmen and it made a great memory for their first year at IHA.

All photos are courtesy of Mrs. Proscia and the Photography Club. 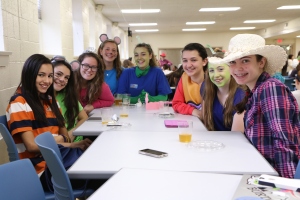 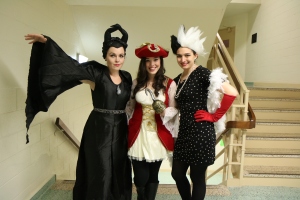