Taylor Swift’s latest album 1989 was released on October 27th, and has already been selling out in stores. Photo Credit: The Daily News

It’s finally here. One of the most anticipated albums of the year has been released and Swift’s style has changed for good.

Taylor Swift released her 5th studio album entitled 1989, on October 27th and crushed all ideas of being a country artist.

1989, named after her birth year, shows that country was merely a vessel for 23-year-old Swift.

As she soars into the pop/synth pop genre, Swift gives us a taste of her new world. Unlike Swift’s other albums, 1989” is built over drum programming, synthesizers, pulsating bass and proceeding back vocals and guitars. It’s lyrical style though, has not strayed from Swift’s famous love topics. The album ventures deep into the complexities of relationships and how some go right, and some go terribly wrong.

The album opens up with its first joyful track “Welcome to New York.” The song seems to be based on Swift’s recent move to New York City from Nashville, but it is more of a deeper representation to her new change of genre. The song speaks of how New York waits for all who venture to it, and how accepting of a city it is, just like her new pop artist title.

The song starts with a sharp lead and a snappy snare drum beat, leading into a very 80’s sounding synth beat. Swift underlays deeper octaves with her voice making for a very interesting sound. It is very inviting and happy; it is a great opening track.

The second track on the album is “Blank Space.” This is one of the more favored tracks on the album and really reflects Swift’s new tone. With radical synthetic drum beats and powerful lyrics Swift, tells a story about love and how it starts beautifully and ends in disaster, but once you finish, you want to start again. Swift also hints upon her long list of ex lovers in the song and how she’ll always have a ‘Blank Space’ for a new one.

The third track, “Style,” opens with a funky, synth guitar riff and puts any listener into the dancing mood. The song seems to be talking about people with classical styles, but really has a more of a sinister meaning. Swift sings about a relationship that goes ‘round and round’ and comes crashing down every time, but it never ends; hence it never going ‘out of style’. Mid-song Swift sings, “take me out!” meaning she wants out of the whirlwind of a relationship.

The next track, “Out of the Woods,” starts with a chanting, heavy synth, ballad with sharp tones. In this track, Swift sings about a relationship that constantly finds itself on the rocks but is so exhilarating at the same time. She talks about the couple being “built to fall apart, and fall back together.” Clearing the woods seems to be a metaphor for getting out of the rocky part of a relationship. This song is said to be about Harry Styles–Taylor’s former boyfriend.

The fifth track on the album, “All You Had To Do Was Stay,” opens will an under-water like sound and blasts into a sick synthetic beat. Swift belts out her feelings for past lovers who try to re-enter her heart. She sings about how she was all his until he left her. This song is a beautifully deep song, and a personal favorite. 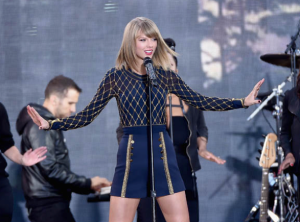 Taylor Swift sings some of her latest singles at a recent concert. Photo Credit: Getty Images

Here it comes! Track number six–“Shake it Off”–undoubtedly the most popular song on the album. This track has kicking trumpet synth beats that will make you want to get on your feet and dance. Swift addresses all her haters in this track, brushing them all of, and well–just- shaking it off!

Swift introduces another pulsing guitar riff in track seven, “I Wish You Would.” Lots of big drums complement Swift’s melancholic feelings about love lost. Much like her song “Enchanted,” she seems to be very reminiscent of an old love, and wishes the mystery man the very best.

Track number 8, titled, “Bad Blood,” is filled with harsh chanting tones and snare slaps. The song speaks of a good love turning sour when one member makes a really big mistake. Swift sings about a back-stabbing man who left her hurting with no relief. Swift sings about how “band-aids don’t fix bullet holes,” and how what this person has done has brought ‘bad blood’ into the relationship.

Track number nine, “Wildest Dreams,” begins with a heart beat like synth with a violin- like overtone. This track speaks of a relationship that won’t last very long but will leave a big impact when it’s through. This song is very scandalous for Swift as she makes many sexual references in the song, straying from her more goody goody love song. This mystical song will have you grabbing for your hairbrush mic so you can dance and sing around your room.

Another personal favorite, track number ten, “ How To Get The Girl,” is quite an interesting song. With a snare slapping synth beat and an acoustic riff, Swift sings about falling for a boy’s ‘I want you back’ game. This song is more of the story-telling type like one of her past songs “The Story Of Us.” This song is one almost any girl who has taken her ex back can relate to.

When Swift writes a slow song, it usually hits home in everyone’s hearts. In track eleven she does just that with “This Love,” When the track starts up, it feels as if you are lying on the shore letting the waves smoothly crash over your entire body. This song has a magical way of not only letting you hear the song, but feel it as well. The song speaks of the cliché line, “if you love something set it free” as Swift explains she let the love go but it came back to her. This is overall a wonderful track.

Winding down the album with track number twelve, “I know Places,” Swift introduces this song with a marching band-like synth beat. The song describes the star’s obvious troubles with the media invading her personal relationships.

Swift concludes the album with her lucky number track thirteen, named “Clean.” Like most real-life love stories, they end in tears. This tune speaks of her drowning until she finally wakes up and is clean. It is a perfect closer to the album because it almost makes 1989 one large love story ending with a cleanse.

Swift hit home with her first documented pop album and really lived up to the bar that was set very high for her. Swift has already sold more copies of the album any of her experts would have guessed she would and she is truly soaring into her new vessel. Swift’s deluxe album also comes with three bonus tracks and 13 polaroids of herself.