Ebola seems to be the topic of conversation everywhere, and New Jersey is no exception. All 72 of New Jersey’s critical care hospitals have been undergoing drills for Ebola; however, this may not be enough.

Richard Bridge, Chief Executive Officer of the New Jersey State Nurses Association, voiced his opinion that if there were to ever be an Ebola patient in New Jersey, he or she should not be treated here, but in one of the four bio-containment units around the country. These bio-containment facilities have structures that cannot be quickly replicated at New Jersey hospitals such as negative pressure rooms and entryways, and air filtration systems. Bridge stated that if there were an Ebola patient in New Jersey, doctors need to “put them in an ambulance and ship them to where they need to go.” 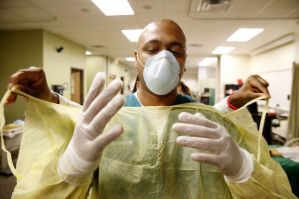 New Jersey nurses are also becoming increasingly more worried about the threat of Ebola, with some even asking if they can refuse to treat a suspected Ebola victim. This concern is only going to grow especially since a second health-care worker who treated the country’s first Ebola victim has contracted the disease.

While nurses can obviously resign from their job, they cannot walk off the job mid-shift regardless of what the patient is suspected of having.

Despite Ridge’s stance on the topic, New Jersey hospitals are going to continue running drills on how to care for a suspected Ebola patient, as it is what the Center for Disease Control has ordered them to do at this time.

Ridge suspects that New Jersey will eventually designate a single hospital to become a treatment center for Ebola. Until that happens, New Jersey hospitals will continue to prepare for the possibility of Ebola in order to find out what areas of the hospital need improvement if such a threat is to ever arise.