Get the warpaint out because it’s time to discuss the epic IHA Powderpuff game that occurred on Saturday, September 27th.

It started off as a sunny morning when the players started to arrive. With their sneakers laced and their hair pulled back into ponytails, the girls were ready to meet their matches. Teams met with their coaches, got their individual t-shirts, and quickly got to work.

The teams began their warm-ups, jogging up and down the field and warming up their throwing arms so they could get the perfect spiral. Plays were designed, schemes were made and nerves started to rise.

After about an hour and a half of warming up to get the blood flowing, it was time–time for that strength to be put to test on the field.

The freshman and sophomores were up first. The “silly” sophomores came out with their game faces on, making it clear that they weren’t joking around this time. They stood at the line of scrimmage showing off their powder blue shirts, getting ready to snap the ball. The freshmen on the other side wore white t-shirts topped with fierce black bandanas, showing that they weren’t messing around. 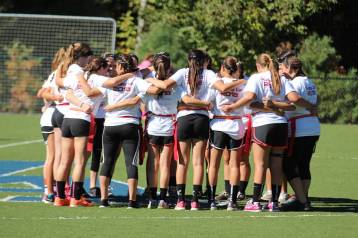 Freshmen huddle before their big match.

The sophomores kicked off to the freshmen and the game began. It was an intense back and forth game. Players would sprint down the field like cheetahs until someone ripped the flag around their waist to the ground.

Touchdowns were scored, the clock ran out, and before they knew it, the game had ended with a tie. The two teams went into a quick overtime, but the tie stayed stagnant. The deciding win was then relied upon a coin toss, which the sophomores won.

The sophomores would now be going against whoever won the next game- the juniors or the seniors.

Before the exhilarating game between the juniors and seniors, the two teams hollered their pre-game chants. The seniors huddled together and pumped themselves up with their loud mantra, earning cheers from the crowd.

However, the juniors were louder. 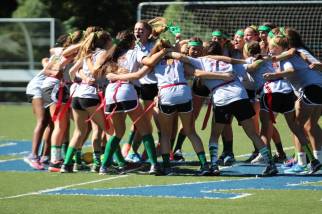 Gianna Beckmeyer, one of the girls on the team (whose father was the coach),  stood in the middle of the huddle and screamed, “Who’s gonna bring the blood and pain?” and the wild response from the team was “JUNIORS!”

Gianna shouted her sentence again and the response from her team came out even louder. The huddle then screamed the chorus of “Seven Nation Army” and moved their huddle side to side before erupting in cheers.

It was officially game time.

The gray shirts (juniors) walked on to the turf, glaring straight ahead at their opponents–the pink shirts (seniors). 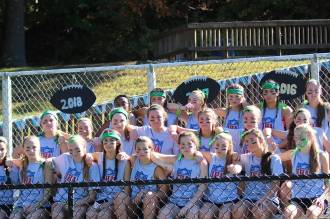 The junior team awaits their next match.

The battle of the upperclassmen began. The seniors started off with the ball, sprinting forward and gaining yards.

However, the juniors’ defense was strong. They tore at the flags and quickly claimed possession of the ball.

It was another close game- the juniors would score, but then the seniors would answer that with a touchdown of their own. The game went into yet another overtime.

However, the juniors pulled through in the end and came out with a win against their seniors.

Kyra Campos-Marquetti and Alexis Wiener cheer after the win.

Now it was time for the clash of the two toughest teams. The Championship game.

There was no turning back now. The teams walked out onto the turf, knowing that whoever won this game would be the champions of the school.

The underclassmen knew that the challenge they were about to face against their superiors was going to be difficult, but they weren’t going to let themselves become intimidated. The juniors, on the other hand, were eager to show them who’s boss.

The sophomores started off with a bang. Within the first few minutes, they had scored a touchdown, earning cheers from the crowd.

However, the juniors weren’t the defeatists type. The quickly called their plays and outsmarted the sophomores by scoring a touchdown on their own. 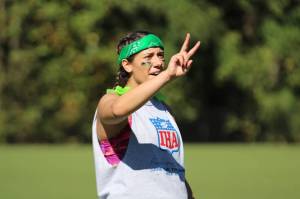 This went back and forth until the clock ran out, leading the game into ANOTHER overtime. However, this time the winner wasn’t going to be decided by some lousy coin toss. This final win could only be claimed by blood, sweat, and tears.

To decide who was getting the ball, there was a coin toss. The two teams stood huddled together, awaiting the result from the 50/50 chance. The juniors won the toss and gained possession of the ball.

Some of the seniors strike a pose before getting down and dirty on the field.

This overtime was different than the regular game play; it had seven players on the field at a time instead of eleven. Maybe the change sparked something in the juniors because when the overtime started, their wheels started turning. The junior class was rushing down the field, scoring touchdown after touchdown.

In the end, it was junior Madison Smith who scored the final touchdown of the game, sealing the win for the juniors.

Least to say, the juniors were ecstatic.

“It feels amazing to have contributed to the win,” says junior, Alexis Weiner. “It was so fun and we all come together and had a great time!”

All four teams had a lot of fun. However, there could only be one winner. And that crown belongs to the junior class. 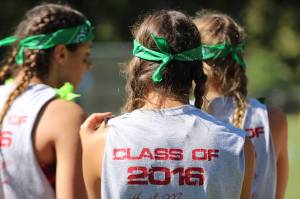 The juniors head onto the field in hopes of defeating the seniors. 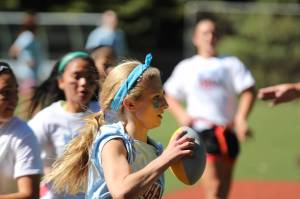 The sophomores are hopeful in their game against the juniors.

The seniors gain possession of the ball in the championship game, but come up short.