This past weekend, the IHA varsity volleyball team traveled to Orlando, Florida to play in the Edgewater-Dr. Phillips tournament. They entered into the premier division, which included teams of the highest level of play, and fought hard in every game to keep their undefeated record alive.

The first day consisted of two pool play matches, both of which were against difficult competitors. Despite being such a young team, IHA played hard and won both games. These wins put them into the gold bracket for the second day, where their skills and chemistry would really be put to the test. 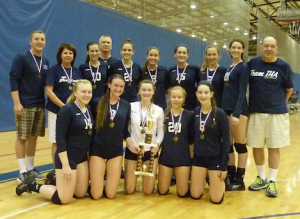 The IHA volleyball team earns a trophy at the Edgewater & Dr. Phillips tournament in Orlando, Florida on Saturday, September 27th.

IHA played a crossover match before entering into the semifinals. There the team played in an impressive match against Gulliver Prep, winning in just two sets with close scores of 27-25 and 25-22, earning a spot in the championships.

IHA lost the first set of the championship match against Palm Harbor High School, 18-25. The girls used the loss as motivation, and staying calm under pressure, they won the second set by just three points with a score of 25-22.

At this point, IHA was playing with incredible chemistry and was putting complete and total effort into every ball. Every previous point had led the team to this one final set. The girls played with a determined defense and an aggressive offense, every kill bringing them closer to success.

Leaving everything they had on the court, IHA climbed its way to victory defeating Palm Harbor in the third set 15-12.

“It was an extremely satisfying win and will be an important step for what awaits us back here in New Jersey,” says head coach Maria Nolan.

When the tournament was finished, the team celebrated its triumph in Disney World’s Magic Kingdom before returning back to the hotel where they contemplated how they were going to get the new trophy through airport security to bring safely back home to IHA.