4-0 is the current record for IHA Cross Country Runners, recently receiving a trophy at Newark Academy and claiming 1st in both the JV and Varsity races. 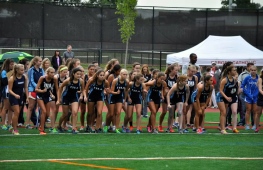 September 13th, thirty-two IHA Cross Country runners drove down to Newark Academy for their 1st Invitational of the season. Over sixteen teams competed in the JV and Varsity races with a total of about 170 girls.

The girls began training in late June and have continued to work hard as the school year began. This was their 1st time attending the Newark Academy Invitational and running on its 5K course. Although the course was a big change from the usually flat terrain at Darlington, the change of scenery seemed to benefit the girls. The girls’ nerves quickly went away once the gun went off.

“I didn’t race at the meet, but had just as much fun watching from the sidelines as IHA won by far,” freshman runner Megan Rice said. 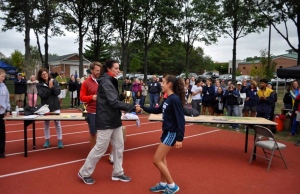 When asked about the competition, runner Jackie Townsend was happy to say, “Villa Walsh was our tough competition and a lot of our top girls came in before their top runner.”

IHA Cross Country continues grow as a team and is thrilled to compete in their next invitational at Maymont, VA.